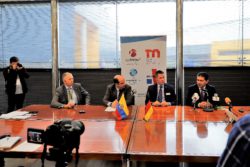 The partnership with Meditech Colombia (Bogota) is brand new. A memorandum of understanding was signed to this end during MEDICA 2017 in November last year. On 4 July in Bogota, at Meditech 2018 (3 - 6 July), the official contract was concluded between the Messe Düsseldorf Group and Coreferias (International Business and Exhibition Center), Meditech’s event organizer. According to the contract, the Messe Düsseldorf Group will hold a 50% stake in Meditech via its subsidiary Messe Düsseldorf North America (Chicago), become involved in organizing the event and accelerate its marketing using its worldwide network of 75 overseas branches and 12 affiliated and subsidiary companies spread over 139 countries.

“The Colombian medical technology market is experiencing one of the strongest growth rates in Spanish speaking Latin America, and Meditech constitutes one of the most important healthcare trade fairs here. In terms of strategy, it is important that we show our colours in this market by flying the MEDICAlliance flag”, stated Horst Giesen, Global Portfolio Director for Health & Medical Technologies at Messe Düsseldorf, thereby stressing the significance of this new commitment. The sales volume for the Colombian market for medical technology amounts to 1.3 billion US dollars and is expected to grow by at least 20% before 2019, with an import quota of 80% (Source: gtai).

Roberto Vergara, International Business Director at Corferias, is also delighted to conclude the contract: “Messe Düsseldorf is one of the biggest international trade fair organizers in the world. Signing this alliance contract helps us (Meditech) to attain an international profile which extends beyond Latin America and traverses countries, as well as attracting many more exhibitors to Meditech who would be interested in this emergent market”. Of the 300 exhibitors that took part in Meditech 2018, 40% were international bookings. Robert Vergara also believes that increased participation from international exhibitors at Meditech will make the event even better for the specialist audience in the future.

Meditech takes place at the trade fair hall in Bogota every two years. Corferias owns the trade fair premises. This year, Meditech received over 10,000 visitors. Meditech orients its events towards its target audience, which is constituted of medical professionals and managers from healthcare facilities, alongside a professional audience from the science and policy sector and service providers for the healthcare industry.

All data, facts and information on the MEDICAlliance medical trade fairs are available online at: http://www.medicalliance.global.

The umbrella brand MEDICAlliance encompasses all global healthcare activities of Messe Düsseldorf – along the entire value and supply chain of medical care and rehabilitation as well as relevant upstream supplies and services. With currently 11 events the MEDICAlliance is represented in Germany, China, Singapore, Thailand, India, Russia, Brazil and Colombia. By means of 12 shareholdings and/or subsidiaries of Messe Düsseldorf and 71 foreign representations for 132 countries the trade fair concepts are exported worldwide in line with market needs.