Joints can suddenly or gradually deteriorate and lose their natural strength, whether it’s due to accidents, diseases or simple wear and tear. In some of these cases, implants of artificial joints – endoprostheses - can help. As a joint replacement, they are designed to stay in the body for as long as needed and as such improve the patient’s quality of life and mobility.

The implantation of endoprostheses is already a routine procedure. Endoprostheses of the knee, hip and ankle areas are most frequently implanted.

Artificial joints - endoprostheses – replace natural joints that are no longer able to properly perform their natural function without causing pain. Endoprostheses most commonly replace knee, hip and ankle joints. According to Destatis, the Federal Statistical Office of Germany, joint replacements were the most frequent surgeries in Germany in 2017, clocking in at over 238,000 hip endoprostheses and nearly 192,000 knee replacement implants. According to research studies, this type of surgery has, become a routine procedure in Germany. There is a clear upward trend as people get older and more active. Endoprostheses can also replace wrists and ankles, shoulder and spinal joints. Patients have the option of either partial or total endoprostheses. A partial endoprosthesis only replaces a specific part of the affected joint, while a total endoprosthesis restores the whole joint. The type of endoprosthesis largely depends on the patient and his/her pre-existing condition, age, weight, physical activity, bone density or quality and allergies to metals.

Health risks can result both during a surgical intervention – think unplanned injuries to nerves and muscles – and after implantation – examples include swelling, infections, and blood clots. Though a rare occurrence, sometimes patients end up with a leg length discrepancy, which must be compensated by wearing custom orthotics. Fear about the surgery, prosthesis loosening, worry over a prosthetic breakdown inside the body, or diagnostic uncertainty due to not visiting a physician – all of these are reasons why surgeries are often being put off and must then be performed at the very last minute when pain relievers are no longer able to provide relief. Another drawback refers to implant coatings that were made to protect allergy sufferers and them potentially rubbing off, causing metals such as chromium or cobalt to come into contact with the tissue and triggering allergies. One solution is smart implant coatings, a wafer-thin diamond-like carbon coating (DLC) for endoprostheses developed by physicists from the University of Augsburg. In this case, zinc oxide particles are embedded in the DLC layer. Since the pH of the infected wound is acidic, the coating releases zinc ions, which are toxic to microorganisms and promote the wound healing process. There is a low risk of tissue damage in this setting. Yet apart from any risks, endoprostheses offer many benefits that are apparent at work, home and at play.

Thanks to a polymerized synthetic, the cemented endoprosthesis can be anchored immediately and stably in the bone.

All patients want their joint replacement to function and last as long as possible. That’s why endoprostheses must be designed and built accordingly.

For example, a hip replacement consists of an acetabular component (hip socket), the femoral head and the femoral stem. The femoral head is placed on the end of the endoprosthesis on one side and moves in the socket on the other side. It forms the link between the socket and stem. There is a cementless versus a cemented alternative, with the former being the most frequently used option. With both types of implantation, the stem of the endoprosthesis is inserted into the patient’s hollowed femur and the acetabular component is pressed into the pelvic bone. Cementless implants allow the bone to attach directly to the textured surface of the endoprosthesis without the need for cement, similar to the way a bone heals when it has been fractured. The advantage is that it can withstand full load immediately after the surgery. A cemented joint prosthesis uses fast-drying polymerized bone cement to help affix it to the bone, causing a shape-closed design. As a result, the endoprosthesis is immediately securely anchored in position and is especially beneficial in cases of bone metabolism disorders and osteoporosis when the natural bone is no longer able to carry the weight of the implant. 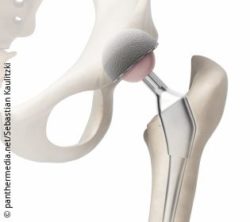 During the implantation of a hip endoprosthesis, the shaft is inserted into the natural milled thigh bone, while the ball head is pressed into the pelvic bone.

The prosthetic femoral head is made of ceramic, while the inlay is made of polyethylene, a thermoplastic polymer that takes over the "cartilage" function. The plastic allows a good range of movement of the artificial joint, while wear and tear are minimized. Most endoprostheses are made of special metal alloys based on titanium, cobalt or chromium. Whatever the material, it must be well tolerated by the patient’s body. The possibility of a patient’s allergic reaction should be excluded to avoid any risk. Compared to other materials, ceramic prostheses have lower rates of wear and friction. Having said that, there is a risk that they can fracture in an accident and that splinters might be released in the patient’s body. These can settle in tissue, making their removal by blood impossible. Not only is this painful, but the patient has to undergo one or several surgeries to remove the splinters. Only if the endoprosthetic device bonds well with the bone and the material is safe for the patient’s body will it last a long time and withstand loads.

Products and exhibitors relating to endoprotheses

Exhibitors and products relating to implants and endoprostheses can be found in the MEDICA 2019 catalogue:

Further exciting articles on the topic from the MEDICA.com editorial team:

An implant that lasts forever?

Bristol researchers have conducted studies on the success rate for hip and knee replacements. They analyzed data registry records from Australia, Finland, Denmark, New Zealand, Norway, and Sweden, which hold more than 15 years’ worth of data.

The EU project APRICOT is also committed to ensure that implants last as long as possible. They are developing a new biocompatible implant. "This approach is disruptive in that it’s easy to insert the implant and avoid collateral damage. This makes it possible to preserve the joint tissue and maintain mechanical properties, promoting the ability to self-repair and regenerate", says Dr. Oliver Schwarz, researcher at the Fraunhofer Institute for Manufacturing Engineering and Automation (IPA).

More than just an artificial joint

Replacement implants include many risks. It’s hard to predict how a patient’s body will tolerate the implant. What’s more, implants are not always necessary and pain relievers are not always enough. Needless to say, everyone wants to be able to run a marathon again after a knee replacement, have no more pain after hip surgery and be fully mobile and return to normal daily activities without pain. Artificial joints improve the quality of life for both young and old. With the help of research, studies, and digitization, medical technology is driven by the pace of progress, ensuring that risks will likely be minimized in the future and result in great longevity of endoprostheses. 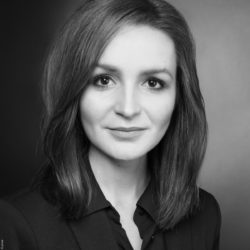 The article was written by Diana Heiduk and translated from German by Elena O`Meara.
MEDICA-tradefair.com