Interview with Prof. Michael Nitsche, Director of the Department of Psychology and Neurosciences, Leibniz Research Center for Working Environment and Human Factors at Technical University of Dortmund

The treatment for many neurological and mental disorders is far from being an easy feat. Drug therapies always require accurate medication adjustments, while brain surgeries have the potential for risks and complications. Non-invasive brain stimulation takes a different approach: magnetic fields and electric current change the activities in the brain - without putting the patient at risk. 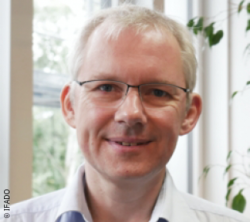 In this MEDICA-tradefair.com interview, Prof. Michael Nitsche talks about the different types of non-invasive brain stimulation, explains how they can be used for treatment and speaks to a need for more research.

Prof. Nitsche, how does non-invasive brain stimulation affect the brain?

We use repetitive magnetic stimulation to achieve sustained effects via increasing and decreasing magnetic pulses, and lasting several minutes in the case of electrical stimulation. The clinically interesting aspect is that we affect neuroplastic changes in the brain with stimulation – that being changes in the spontaneous activity and excitability of the stimulated regions that remain after the stimulation has been completed.

What treatment options do these procedures offer?

Nitsche: Pathological changes in the excitability and activity of the brain are basic mechanisms that can trigger various symptoms. In the case of depression, we see a reduced activation in the prefrontal region of the brain for example. In schizophrenia, certain brain regions become overactive. Post stroke, certain areas that are relevant to clinical symptoms such as movement and speech disorders, are decreased in their activity.

The fundamental idea behind brain stimulation is that we can reduce these pathological changes and somewhat normalize the brain activity in the stimulated areas. Prefrontal transcranial magnetic stimulation is already approved as a routine procedure to treat depression. Other applications – such as post-stroke rehabilitation, treatment of chronic pain syndromes, schizophrenia, tinnitus and other neurological and mental disorders – are still experimental approaches.

Brain stimulation with magnetic fields and electric current can be used to regulate activity in brain regions.

How successful is magnetic stimulation in treating patients with depression?

Nitsche: Treatment success rates are somewhat comparable to the treatment success achieved with antidepressants. Stimulation definitely has a clinically relevant effect for many patients. Having said that, it is generally not used as the first-line therapy. It comes into play when drug therapies have proven unsuccessful. In approval studies, the most pronounced effects were observed in patients where pharmacological treatment with two to three antidepressants failed.

Are there risks of stimulation procedures?

Nitsche: If the procedures are used according to the guidelines and recommendations, the risk of possible side effects is very low. The process may cause headaches and fatigue. This applies to both magnetic and electrical stimulation. The stimulation may prompt patients - especially those suffering from bipolar depression – to go from depressive to hypomanic episodes. Having said that, so far this describes only isolated cases. The same might also happen with medication treatment.

There are also several exclusion criteria. Patients with an implanted deep brain stimulator or a pacemaker should not undergo brain stimulation because the induced currents might cause a failure of the device. And in patients with epilepsy, an enhancement of excitability of the epileptogenic brain regions with stimulation is contraindicated. However, generally speaking, these procedures are usually well tolerated.

You are advocating for the creation of standards for stimulation studies. What standards do you have in mind?

Nitsche: A consensus group of colleagues who study brain stimulation recommended specific stimulation frequencies and intensities for repetitive TMS that should be applied to avoid triggering epileptic seizures. Obviously, these requirements should be met. Aside from that, the above-mentioned exclusion criteria for patients should be adhered to. It is essential that studies on clinical applications are double-blind and randomized because they deliver the most meaningful and profound results.

The interview was conducted by Timo Roth and translated from German by Elena O'Meara.
MEDICA-tradefair.com
You can find exhibitors and products around brain stimulation and the use of magnetic fields and electric current in the catalogue of MEDICA 2018:

Back to health – when electrical pulses provide healing