Resuscitation via videostream – how EmergencyEye can save lives

When the heart stops beating, irreversible brain damage occurs within minutes without resuscitation. Meanwhile, action is only taken in very few instances of cardiac arrest. Even first responders frequently feel helpless in this situation. In Germany, approximately 65,000 people die each year from sudden cardiac arrest. This is where EmergencyEye comes in to offer valuable support. 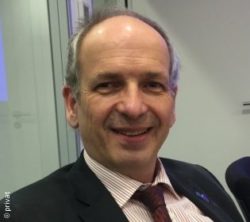 In this MEDICA-tradefair.com interview, Professor Wilhelm Stork describes how EmergencyEye can help in emergencies, explains why telemedicine is generally very important and reveals how Germany still lags behind when it comes to the digitization of healthcare.

Professor Stork, what is the basic idea behind EmergencyEye?

Prof. Wilhelm Stork: EmergencyEye is a project concept that is part of the RAMSES (Remote Access to Medical Information on Smartphones during Emergencies and Health Crisis) research project, which is funded by the EU as it relates to the EIT Health Program. It targets the high mortality rate as a result of sudden cardiac arrest. The idea behind the project: If an emergency call is placed, the caller only verbally explains the situation to the dispatcher over the phone. If based on this account the dispatcher determines that resuscitation is required, he or she will try to instruct the first responder via the phone on what steps should be taken on-site. Meanwhile, this verbal communication is not very successful in practice, as evidenced by the high mortality rate of nearly 90 percent. Nowadays, practically everyone has a smartphone with a built-in camera. Both can be used to not only explain the emergency situation but to actually show the dispatcher the situation at hand. He or she can, in turn, use this to interactively instruct the first responder on what should be done.

How does that work exactly?

Stork: As soon as the first responder makes the emergency call by using his/her smartphone to talk to the dispatcher, the phone number is transmitted to the emergency control center. A URL will then be sent back via text message with an attached app ready for download. The user now only has to enable this app to be installed. The app then turns on the camera and creates a video call connection to the dispatcher. In doing so, the first responder could instantly show the person with possible cardiac arrest lying on the floor. The emergency medical dispatcher is subsequently able to better assess the situation and instruct the first responder on how to take resuscitation measures. Obviously, the best-case scenario would be if there were at least two first responders so that one can hold the smartphone with the camera while the other is taking action.

In case of sudden cardiac arrest, the dispatcher can monitor and correct the first responder's actions. For example, during chest compressions, the recommended compression depth is about eight centimeters, which most people shy away from because they are afraid of hurting the patient's chest area. The dispatcher can monitor this closely via the camera and coach the first responder with respective instructions to exert more pressure if needed.

The purely verbal description of both the emergency situation and the necessary resuscitation measures is not always optimal. EmergencyEye would like to link the conversation between first-aider and dispatcher with video telephony.

What are the requirements for using this app?

Stork: Somebody needs to have a smartphone and speedy network access to use videostream. This is likely to be the case almost anywhere throughout Germany. What's more, the first responder should also be physically capable of performing resuscitation measures such as chest compressions. People may perhaps not always have a smartphone at hand or great network access and the first responder might not be able to perform CPR, but if this process can save even just a few lives, it will be a great success.

At the "EmergencyEye Hackathon am Ring" on February 16 – 18, 2018, you called on people to develop technical solutions for emergency medical management. What has happened since then?

Stork: Several teams - among them students and startup developers – came up with ideas for telemedicine solutions, which included cell phone programs, databases or platforms. There were several interesting developments during that weekend, which were obviously only presented in a rudimentary form for the time being. Needless to say, it requires corresponding investments in development to turn these ideas into something viable. Having said that, these solutions have one thing in common: They are amazing ideas that can truly boost advances in telemedicine. The Hackathon was essentially aimed at motivating and encouraging young people to push their ideas forward - and I think the event was a great success from that perspective.

The smartphone has become our daily companion. As the EmergencyEye project shows, it can also be a great help in emergencies.

What potential do you see in telemedicine's role in emergency medical care?

Stork: I think there isn't just potential, but also a strong demand and need for it. Since the First World War, emergency medical services use the triage system for example. When you have a large number of injured persons, they are classified via color-coded triage tags, enabling the emergency physician to distinguish the urgent from the less urgent cases at a glance. In another project – RescueWave - we developed a digitized way of triage. The paper triage cards are replaced by an electronic system, where emergency physicians can not only select a color code for an injured person, but also transmit the corresponding GPS coordinates to the control center. Thanks to a layout map, operation control is subsequently able to better direct both paramedics and vehicles at the accident site than has previously been the case.

In Germany, digitization of healthcare should be expanded in general. We still have a lot of catching up to do in this area compared to the Scandinavian countries and Switzerland. Services and products that we consider innovations have already been commonplace there for the past 20 years. What's more, we are unable to analyze the majority of collected data – thanks to the legal situation and due to documentation that's generated by hand or by using text programs – and consequently, don't take advantage of this data. This treasure trove is lost to us. Germany is in a situation where its population is aging, resulting in rising healthcare costs. Added to this is that the available labor force is declining, while our system has so far insufficiently taken advantage of health information technology. Right now, the debate over information technology is shaped by its potential impact on society and the undoubted threats and risks associated with it. However, this exaggerated fear of new technology misuse causes us to completely ignore the positive opportunities information technology in healthcare can afford us. In my opinion, we need a paradigm shift to change things for the better in this area.

The interview was conducted by Elena Blume and translated from German by Elena O'Meara.
MEDICA-tradefair.com
You can find exhibitors and products from telemedicine, apps and wearable communication devices at MEDICA:

Get to meet werable helpers at MEDICA 2018!

The WT | Wearable Technologies Show offers established companies as well as startups a unique platform to showcase their latest developments in the field of Wearable Technologies. The joint stand not only presents consumer products but products from the entire value chain of wearables. Alongside market ready products, prototypes and research projects will be exhibited to give an outlook on what will be possible in the future.

Read the article about telemedicine in emergencies here