A new analysis method that uses fetal DNA extracted from the mother's blood is designed to non-invasively reach a prenatal diagnosis of genetic disorders in a child. A task force of the Hahn Schickard Society for Applied Research is an active part of the "ANGELab" project and co-developed this diagnostic procedure. 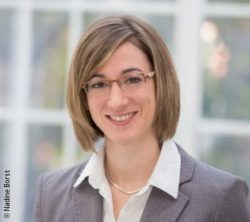 The project name "ANGELab" is an acronym for "A new genetic laboratory for non-invasive prenatal diagnosis". In this interview with MEDICA-tradefair.com, Dr. Nadine Borst explains how the non-invasive, rapid test works.

What is the reason behind the "ANGELab" EU project?

Dr. Nadine Borst: The miscarriage risk of an amniocentesis – an invasive diagnostic procedure – is about 0.5 percent. Our objective was to develop new non-invasive diagnostic techniques that do not pose a risk to the mother or the child.

Why is blood a sustainable alternative to amniotic fluid in prenatal testing?

Borst: During a pregnancy, fetal DNA fragments are circulating freely in the maternal blood stream. These fragments can be distinguished from the mother's genetic makeup and extracted using special techniques such as magnetophoresis or immunoprecipitation.

Several diagnosis systems were developed during the course of this project. How many different diagnostic systems are there and how exactly do they work?

Borst: There are three systems with a modular structure that can be combined as needed. The first system included the development of a lab-on-a-chip device that isolates the fetal DNA from the maternal plasma. The extracted DNA can then be used to perform a qPCR (quantitative polymerase chain reaction) to analyze monogenic disorders. These are disorders caused by a specific mutation.

The second system is also used to extract fetal DNA from the maternal blood. In this case, a qPCR analysis measures changes in chromosome number.

Our task force was involved in the development of the third system. Here the extracted DNA from the first two systems is used to analyze different genetic markers in a PCR. The difference here is that you benefit from the advantages of digital PCR.

Could you explain the term "digital PCR" in more detail?

Borst: Digital PCR divides the sample that contains the original DNA material into many compartments; in our case tiny droplets. An amplification, meaning the replication of DNA, can take place in every droplet that contains the desired DNA. This generates a fluorescent signal. The intensity of the signal allows the distinction between positive and negative droplets and subsequently allows you to calculate the absolute number of DNA molecules. Since a droplet can also contain several DNA molecules, the quantification needs to take statistical distribution into account. Digital PCR enables absolute quantification as well as the detection of rare target molecules and exhibits a higher level of accuracy.

LabDisk (on the left) and DropChip (on the right): plastic cartridges for non-invasive prenatal diagnosis; ©Hahn-Schickard, Image Bernd Müller

You were involved in the development of the third system. What was your exact responsibility in this endeavor?

Borst: We have developed new microfluidic test devices that can be used to easily perform digital PCR. An inlet chamber is on the test device, which is connected with a reaction chamber by a tiny channel. Fluorinated oil is being loaded and the aqueous sample is subsequently being introduced. Only a brief centrifugation process is needed to compartmentalize into about 7,500 droplets. The technology behind it is called "centrifugal step emulsification" and has been patented by us.

In addition to the so-called LabDisk, a rotating plastic disk, the task force also developed the DropChip in the shape of a microscope slide. The LabDisk allows researchers to process eight samples in parallel, each DropChip can process two samples, while the analysis can be conducted with standard laboratory equipment.

How long does it take to get a diagnosis compared to a conventional amniocentesis?

Borst: In the case of a conventional amniocentesis, cells are isolated and subsequently cultivated. It might take several days before you get the result. Meanwhile, in the case of in vitro diagnostics, you already have results after a few short hours.

Have pregnancies been actively observed during the project?

Borst: Yes, a Spanish hospital participated in the project. All in all, approximately four hundred pregnancies were studied for all three systems. We received blood samples of pregnant women that were tested using our systems. These results were compared to findings of standard methods. This portion has not been completed yet but is in its final phase.

Would it also be possible to adopt this system to use in other diagnostic fields?

Borst: Yes, it is a system intended for simple digital PCR implementation and can definitely also be applied to other diagnostic fields. Follow-up projects have already been initiated. The technology is also meant to be used in HIV diagnostic testing, for example, and to detect drug-resistant bacteria in hospitals.

What’s more, we want to place the technology at the public's disposal. Two Spanish companies are involved in the ANGELab project to assist in bringing the developed prenatal diagnostic systems to market.

The interview was conducted by Melanie Günther and Julia Unverzagt and translated from German by Elena O'Meara.
MEDICA-tradefair.com