Pneumonia in Children: Ultrasound or X-Rays?

Pneumonia is the most frequent respiratory disease in children and can even cause death. That is why it is extremely important to make an accurate diagnosis as quickly as possible. If this requires imaging tests, normally X-rays are taken. But there is an alternative: ultrasound. MEDICA.de talks with Dr. Jörg Detlev Moritz about the risks of X-rays for children and the benefits of ultrasound scans. 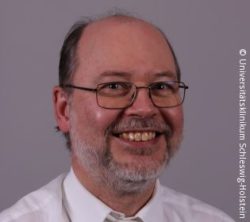 Dr. Moritz, why are X-rays risky particularly for children?

Dr. Jörg Moritz: Maybe you can best imagine it like this: cells are damaged most during the cell division phase. A child’s organism is still growing. That’s why there is a higher rate of cell division that might easier lead to damages. The following damages might occur:

X-radiation can induce cancer for example. The latency period is approximately 20 years. Due to the higher life expectancy of children, the probability of radiation-induced cancer to clinically manifest is much higher compared to older adults.

If X-ray radiation causes damage to DNA in the ovaries or testes, it may lead to hereditary diseases. Since children may be parents someday, these inherited defects can manifest.

Another set of problems comes from child body proportions. A child’s organism is far smaller than that of an adult. That’s why the organs lie much closer together. When X-rays pass through the body, it generally also produces scattered radiation, that being radiation that travels in arbitrary directions and cannot be completely shielded. For example, if X-rays are taken of a little girl’s thorax, the ovaries are hit with relatively more scattered radiation than would occur with the ovaries of an adult woman.

That is why X-rays for children need to be taken very carefully with strict indications. The risk of damages caused by X-rays is subject to the laws of probability. There is no threshold. Having said that, the risk of radiation damage from a single X-ray image is negligible.

What is the difference between an ultrasound and X-ray imaging procedure?

Moritz: They are essentially two entirely different procedures. Corresponding to their density, X-rays are attenuated at varying degrees by the different types of tissues as they pass through the body. X-rays are only slightly attenuated by air. In the case of pneumonia, the air in the lungs is pushed aside by inflammatory secretions and X-rays are correspondingly more strongly attenuated. That is why pneumonia appears as a densification on an X-ray image.

Because of the X-radiation, an X-ray examination involves many risks especially for children; ©panthermedia.net/bernardbodo

Meanwhile, in the case of ultrasound, sound waves are sent into the body. The ultrasonic waves are reflected at boundaries and then sent back to the receiving transducer. How strongly sound waves are reflected depends on the characteristics of tissue – propagation speed for sound in the tissue and the density of the tissue. Ultrasonic waves are completely reflected at the air surface so that it is impossible to image through air with ultrasound. However, in the case of pneumonia, the air is pushed aside by the inflammatory fluid. With ultrasound, the soft tissue structure with trapped remaining air shows in the bronchial tubes.

If there is an increased amount of fluid in the alveolar septum, the ultrasound scan shows certain reflections, so-called B-lines. This, in turn, is an indication of lung disease. You can reliably diagnose a pleural effusion, a relatively common finding in pneumonia, by using ultrasound. Very small levels of pleural effusion are better detectable using ultrasound versus X-rays.

Recently your colleagues at the Icahn School of Medicine at Mount Sinai, New York, published a study in CHEST magazine. What type of study is this?

Moritz: The study explored whether X-ray and ultrasound exams are comparable in diagnosing pneumonia. The physicians of one hospital examined all children with suspected pneumonia, who required imaging by using both X-rays and ultrasound imaging.

How reliable is ultrasound imaging to diagnose pneumonia?

Moritz: Several studies were able to show that ultrasound imaging is just as reliable as X-ray examinations. Sometimes, pneumonia presents with very small sources of irritation that are not yet visible on an X-ray but are already detectable with ultrasonic testing. However, there are also types of inflammation where changes only occur in the core of the lungs. These are not detectable in an ultrasound scan.

So essentially it would be better to first use ultrasound and if things are unclear to add X-rays?

There have already been some prior studies that showed diagnostic sonography to be useful in diagnosing pneumonia. In light of that, why are X-rays still routinely done?

The interview was conducted by Olga Wart and
translated from German by Elena O'Meara.
MEDICA-tradefair.com